What Uber Taught Use About The Future Of Business… 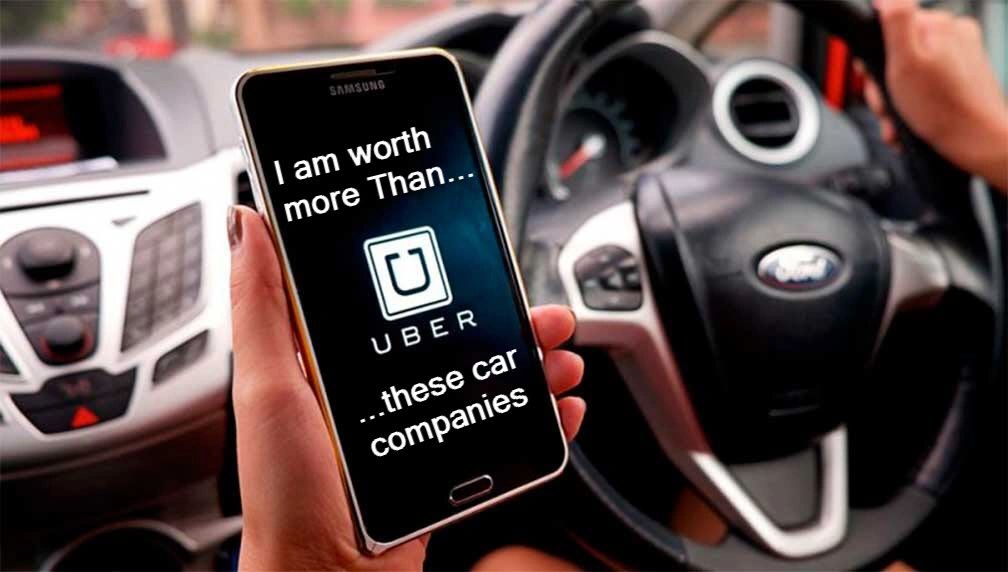 That’s the story of Uber and a

s we learned yesterday, Uber’s expected valuation for its planned 2019 IPO now makes it worth more than GM, Ford, and Chrysler…combined! To help put this into perspective, the big three motor companies started their run at dominance over 100 years ago and in less than 10 years’ time, their combined worth is now less than a company that didn’t even exist a decade ago and does nothing more than re-utilize the cars that they build. Wow.

Back in 2015 I wrote an article entitled How Uber Is Changing The World that I received a lot of responses ranging from how I must be working for Uber to stories of how people are now shedding their cars and only use Uber for all of their transportation…and saving money in the process. My article was not intended to promote Uber but rather help illustrate the massive transformation that is taking place throughout our economy. And it is not alone. Sears, the once great anchor of all anchors stores, just filed for Chapter 11 Bankruptcy protection in a transformation in how we now buy – which I wrote about on how retail is now dead. New mobile and social technologies are changing how we track attribution in our marketing. And as I recently wrote about in my last book The Millionaire Salesperson, selling is now changing based on what consumers’ now want to buy – which is exactly what we are seeing with Uber. And all this comes down to one simple fact…

The day I turned 16, I couldn’t wait to get my driver’s license. And like most other teens of that time, my next focus was on finding a way to buy my first car. This month, my son turns 16 and he is in no hurry to get his license or a car. Most of his friends are the same way. And who can blame them? If they want to get from point A to point B, they can request and Uber from their smart phones…which ALL of them do have and at a much earlier age now. What was once seen as a passport to freedom (a driver’s license) and the tool to getting their (owning a car) has been replaced with the simple desire of easily getting a ride now from somebody else…anybody else with a car in fact which Uber helped make possible. No more worries about car ownership costs, license exams, parking, maintenance, insurance, and whether or not you have had one drink too many to get home. But Uber is simply the beginning of something much larger because people today want…

There is an amazing transformation taking place throughout our economy and what we are seeing with Uber is now happening in virtually every industry and facet of our lives. One day, the whole notion of consumers buying most major products and owning and maintaining them will be a thing of the past. Cars were an easy target – starting with leasing to now trend towards ride-sharing and beyond where most cars will be “used” by consumers and not owned. Home rental rates are at an all-time high with recent studies indicating that fully 78% of consumers now indicate that renting is cheaper than buying a home. And for those who own homes, nearly all of the servicing components of your home are likely to become non-owned services as well. Here is an example of how this is changing from chapter 10 of my last book The Millionaire Salesperson:

Even though we see many major businesses like car dealers, furniture stores, and the like adopt the reframing of value in payments, I am still amazed at how many other businesses still don’t—most common of which are smaller- to medium-sized businesses who just so happen to also have the highest failure rates. One such example came from a recent experience I had when I needed a new water softening system for my home.

Now, for those who don’t know much about soft water systems, in Arizona you have to learn quickly since we have some of the hardest water in the country. Not initially knowing much about these systems, I first reverted to familiarity and we contacted two of the most recognizable names in the business to see how much it cost to “purchase” a new water softening system for our home. Of the options presented, we decided that the higher-end model that contained both the softening and carbon filtering was the one we wanted. That was until we were quoted the prices. Ouch!

Both of the options installed would cost us around $5,000—clearly thousands more than we initially expected to pay for these systems. Upon this discovery, I quickly turned to the Internet and found an unfamiliar company with a comparatively large amount of consumer reviews. Upon further research, I also discovered that this company provided another alternative to buying a new system outright. Their model was for customers to rent an equivalent system, including all service warranties and a five-year equipment upgrade plan, all for $50 dollars a month. To make my decision even easier, the installation costs were later waived on credit after providing them with a few positive reviews online and, best of all, there were no contract commitments— the service was month-to-month and I could cancel at any time.

When I met the owner of this company (Boyett’s Family Rayne Water Conditioning), I wanted to learn more about his business. As it turns out, I quickly learned that the equipment used in the process of water softening is rather fungible and short of a few technological niceties that were lost on me, the quality differences were largely moot. At that point, the decision then came down to the two other pillars to compete on—service and price—and on both fronts they won hands down.

This story helps illustrate not only what we will be selling in the future, but what people now increasing want – outcomes over ownership. In this case, I didn’t want to buy, own, and maintain the means to making clean water – I simply wanted clean water. After this experience, I wonder if my heating / AC systems, plumbing units, etc. are the next “services” I will need to replace what was bought and now broken. If I already pay to service my security, lawn, power and water supply, etc., I would not be surprised if one-day home ownership will include nearly equal payments for both the physical structure and services fully supporting it.

This may sound expensive but remember at that some point, you likely won’t need a garage for the car you won’t need to own to help buy and transport products and services that are now delivered to you. Maybe you can save enough money on services to then convert your empty garage into a new rental unit – which by then could be bought as a service as well. There is an old saying in real estate that the only thing that appreciates is the value of the land. And in the future, this may be all you really need to own…which Uber is now showing us.